Releasing the Inner Barriers to Seeing: Exploring the Mind/Body Connection to Vision (Part 1)

More than half of the people in the United States need glasses or contacts to see clearly. And the other half expects that as they get older, they will, too.

Even though poor vision is the largest health-related epidemic affecting Americans today, even though younger and younger children are needing glasses and even though more middle-age people are needing bifocals and reading glasses, nearly everyone thinks that it’s all perfectly normal and acceptable.

Poor vision is, quite simply, the problem that nobody wants to see.

Yet, doctors and researchers are at a loss to explain its exact cause. (1) Although some still cling to the old belief that vision problems are inherited research dispels this myth: only 3 people out of every 100 are actually born with vision problems. (2)

From a holistic point of view, not seeing clearly means more than not being able to see across the desk, across the room or across the street.

We understand this subconsciously, if not directly. Take the movies, for example. When a screenwriter wants to portray a character who is timid, shy, or unsure of him or herself, invariably that character wears glasses. And we in the audience get the message that wearing glasses conveys.

Behavior and personality studies on nearsighted people have been done since the early 1900s. Richard Lanyon. Ph.D., of the Harvard Medical School, co-authored a journal article reviewing the many studies that clearly document the relationship between personality and vision. (3) Nearsighted people consistently test as being more introverted, shy and lacking in confidence than their clear-seeing counterparts.

Spiritual teachers also recognize this relationship. Louise Hay, author of the classic You Can Heal Your Life, suggests that nearsighted people have a fear of seeing their future and of not trusting what is ahead in their lives.

Seth Speaks author, Jane Roberts, notes that for many, nearsightedness was a physical manifestation of something that they did not want to see – on an emotional, psychological and/or spiritual level.

My experience confirms this relationship between the inner and outer aspects of seeing. My experience also shows me that it is not only nearsightedness that has a mind/body connection: farsightedness, astigmatism, eye imbalances – even some medical eye problems – also do.

The eyes are more than a camera. And not seeing clearly means more – much more – than only that the camera being out of focus.

Our eyes are also sensitive emotional receptors through which we relate to others. We express our feelings through our eyes. We can often tell what somebody is thinking by the “look” in their eyes. And, in many ways, how we feel tempers how and what we see.

All of us have been in situations where we see things we don’t like or that have hurt us in some way. Perhaps we imagine, “If I pretend not to see it, it will disappear,” or “I don’t want to see this part of myself or what’s going on around me.” Pretending not to see or not to know is one coping strategy that may be a useful protection at certain times.

The difference is that those who do not see clearly have ingrained this response into their consciousness, most often in response to particularly stressful situations that occurred prior to needing glasses the first time.

I surveyed 583 people before they began using The Program for Better Vision, a vision improvement audio course I developed. I found that 63% of them were able to remember at least one significant change that occurred in their life during the 12 to 18 month period before first noticing a limitation in their vision. I call this period the Vision Transition Period.

The changes they noticed fell into one or more of these three categories.

Whatever the specific external changes may have been, they are merely a catalyst. The key is that the emotional response of not wanting to see or be seen, of pulling away or hiding from the world, develops first on the inner levels before it manifests physically. 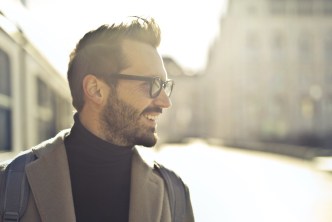 Written by Martin Sussman
Add comment
Getting the Most From Your Eye Doctor: A Holistic Perspective
FacebookTwitterPinterestWhatsApp
How Flexible Are Your Eyes?