This small, scrubby tree from the Middle East and northeast Africa isn’t very handsome, but it makes up for its lackluster looks with the precious gum it exudes. An important trade item for more than a thousand years, myrrh was a primary ingredient in ancient cosmetics and incenses. The Egyptians mummified their dead with it.

Cosmetic/Skin Use: Myrrh is an expensive treatment for chapped, cracked or aged skin, eczema, bruises, infection, varicose veins and ringworm.

Emotional Attribute: Myrrh has been used since antiquity to inspire prayer and meditation, and to fortify and revitalize the spirit.

Opopanax (Illicium verum) –This oil from Somalia and Ethiopia is sold as a low-grade myrrh. Lumps that exude from the root and stems are steam-distilled after hardening. Opopanax gives liquor a winelike taste and is a fixative. The herb that bears the name Opopanax chironium is a Sudanese and Arabian plant similar to parsnips, and isn’t made into oil. To add to the confusion, cassie (Acacia farnesiana) is sometimes called “opopanax.”

Copaiba Balsam (Copaiba officinalis) –This South American oleoresin (not really a balsam), called copal, is similar to myrrh. In Central and South America, where it has been used for centuries as incense, the Catholic church uses it in place of myrrh, and herb vendors sell it in almost every market. 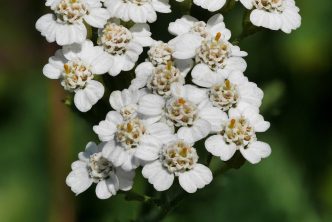 Kathi Keville has studied herbs since 1969. Her attraction to fragrant plants led to an involvement in aromatherapy. Her other books include Herbs for Health and Healing; The...