Got Rhythm? The First of a 2-Part Series on Recreational Music-Making

If your gut response is “no” and you’re telling yourself this column is for someone else, perhaps you’ll be pleasantly surprised. Actually you’re in good company.

Frankly, I’m surprised people are simply not inclined to believe they are musical. I find this disconcerting especially in consideration of music’s extensive history that extends well into antiquity. In addition, it’s difficult to comprehend such a prevalent belief especially in an era when leading medical institutions are utilizing music therapeutically.

Yet every time we introduce recreational music-making interventions to our patients at the Center, and I ask the question, “Are you musical?” the response is predictable. Most people shy away from even volunteering a response … at least initially. Yet when given the chance to express themselves musically without critique, it’s amazing how fast people join in and make music – great music in fact! And frankly they love the experience!

You might be asking yourself why there is such a dramatic and sudden turnaround for these folks. The answer probably lies in our past where impressions of self were progressively chiseled in stone over many formidable years.

Let’s take a few moments to reflect upon early childhood in order to understand how our impressions of musicality evolved. Prior to expressing words and sentences, most of us were well into music-making. Having graduated from a nine month preparatory course in Body Music 101, we were no less than self-proclaimed virtuosos.

It was finally time to show the world our stuff. We played incessantly with our favorite instruments. These were the most fascinating assembly of creative tools we had ever seen – spoons, pots, pans, glasses, cups, empty toilet paper rolls, keys and practically anything we could get our hands on. The possibilities were endless as were the incredible musical opportunities for ongoing entertainment.

We delighted in spontaneous incessant drumming that seemed like noise to the untrained ear. Yet we liked it, loved it in fact, and our beat was all that mattered. We delighted in putting those amazing sounds together every chance possible.

Our parents actually encouraged those spontaneous performances, at least in small doses. Music-making often served to keep us busy and out of trouble. For parents, grandparents and baby-sitters, it was simply a toss up between making music or making a mess. Sometimes they were one and the same.

Yet as the years passed, life became more serious for reasons we never fully understood. And those unfinished symphonies became more of an annoyance than a benefit to those entrusted with our care. Our music seemed to progressively fade.

Yet just as we were butting heads with a horribly restraining and silencing discipline called, “self-control,” new prospects for musical expression once again appeared. There was finally a place to go where our musical talents could be honed and sophisticated. It was called school. And that’s where things really changed!

At first, the experience was terrific. Kindergarten was basically a new and exciting world of expression where we could show off our 5-6 years of musical individualism. There were intriguing things to play – some of which actually looked like real instruments. Those were the best times – singing, playing anything we could strike, hit, blow into or stomp on. The music was great too. We were really making progress!

The good times, however, soon came to a close.

Structured music-making arrived in elementary school. Most of us began with plastic flute-like instruments called flutaphones. For many, these provided a first real musical challenge amidst an experience that had been to this point … unmistakably joyful.

I recall practice being somewhat frustrating for the very first time as my fingers never quite covered all the proper holes in synchrony. Few kids had the dexterity to play it well initially. Yet it was obvious, even at that age, that there was more to music-making than just playing pots and pans. We also knew our parents couldn’t tolerate the squeaking for long and we were right.

For just shy of the breaking point, we returned from school one day with a letter to our parents introducing a new and exciting concept called, “BAND!”

At first the idea seemed great, making music with others – loud, even more noisy than solo performances and exciting. There was one problem however. In order to be in the band, you had to play a real instrument. So in the due course of our progressive educational process, the elders decided to match us upæ the right instrument for the right kid. Right?

Wrong! The problem was figuring out what to play … or better yet, what our parents and music teacher decided we should play. I’m certain personal experience was a significant factor, yet I still can’t imagine how you can look at little Johnny and decide that a trumpet or a cello is simply the perfect fit. Making the transition to “real” instruments is such a far cry from masterfully blowing into empty toilet paper rolls or pounding on milk cartons.

With so many possibilities, decisions were difficult at best. I remembered each shiny instrument appealing to me in one way or another. I daydreamed about playing them on stage even though I wasn’t aware of the sound each made. Ultimately some kids naturally gravitated toward the cellos, tubas and the drums, while others (the more serious ones even at that age) were attracted to seemingly more refined instruments like the violin, clarinet or the flute.

Somehow I wound up with the violin probably based upon the fact that my uncle played one in Europe. It was a short relationship though – lasting just under a week. What immediately followed was the piano. Only Freud could figure out why!

Finally with real instruments before us, a new challenge presented itself. It was called, “practice,” a process that began to reshape the perfect rhythms we once enjoyed. We’ll begin on that note in part 2 next week – Mind Over Matter! 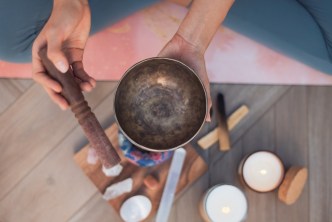 How To Stop Absorbing Other People’s Negative Emotions

Feeling Good: Reaching the Top of Your Game

Barry Bittman, MD is a neurologist, author, international speaker, award-winning producer/director and inventor. As CEO and Medical Director of the Mind-Body Wellness Center, a comprehensive...