Just as we are advised to watch our blood pressure as we get older, the pressure within our eyes is equally at risk with advancing years. Changes in the ageing eye can lead to less-effective drainage of the clear fluid (aqueous humor) in the eye, resulting in a buildup of intraocular pressure (IOP). A dangerously elevated IOP, or ocular hypertension (OHT), is a major risk factor for glaucoma.

The condition is the third-leading cause of blindness in the world. It can strike at any age, but the elderly are particularly susceptible. Current estimates of glaucoma are a staggering 100-150 million cases worldwide. With our ageing population – increasing by 50 per cent in the US alone over the next 15 years – the numbers are expected to soar dramatically (Arch Ophthalmol, 2004; 122: 532-8).

Notorious for its lack of symptoms, glaucoma can cause progressive damage to the optic nerve without your realising it. The damage often involves loss of peripheral vision, which is not easily apparent. It’s only when your field of vision has been seriously reduced (when patients complain of bumping into things a lot) that the sufferer is likely to finally head off to see a doctor (see box, page 2).

As much of the damage to the optic nerve is permanent, the conventional management strategy is to prevent any further visual loss by controlling the ocular hypertension – and there are no prizes for guessing what doctors turn to as the first line of treatment.

Drugs are big business in the glaucoma field. The way doctors prescribe eyedrops (sometimes combining two or more types) to glaucoma patients has helped to rake in big profits for the ophthalmic drugs industry. Worldwide sales of medicated eyedrops for glaucoma average $3 billion (USD) each year, and account for almost half the total ophthalmic pharmaceutical market. Given the predicted rise in glaucoma cases in tandem with the ageing population, that sound you can just about hear is the drug companies rubbing their hands in anticipation.

But these seemingly innocuous drops – which, in most cases, have to be taken for life – cause a laundry list of side-effects, and are often as dangerous to the body as drugs taken by mouth. 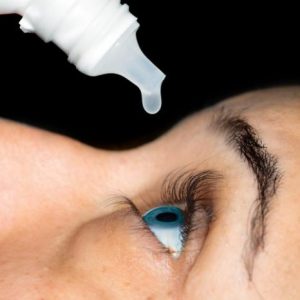 Keeping the risks in sight:
A cornucopia of medicated eyedrops are available for glaucoma, and the mechanism by which they lower eye pressure depends on the class of agent they contain. Needless to say, they all come with their own rather extensive menu of side-effects.

Miotics such as pilocarpine work by constricting the pupil, and stimulating the ciliary muscles to increase the drainage of fluid from the eye.

Downside: Because miotics reduce the size of the pupil, a common complaint is blurred or dim vision. This could also artificially induce nightblindness. Also, as these eyedrops need to be administered four times a day, patients may find it difficult to keep track regularly.

Carbonic anhydrase inhibitors are available as eyedrops (Trusopt, Azopt) or in an oral form (Diamox). These agents inhibit the enzyme involved in producing the aqueous humor, thereby decreasing IOP.

Downside: Chronic use of these drops can cause an allergic response, with redness and itching of the eye (conjunctiva) as well as scaling on the lower eyelids. When taken orally, the side-effects stretch considerably to include frequent urination, tingling in the fingers/toes, skin rash, gastrointestinal disorders, depression, fatigue, impotence, weight loss and lethargy.

Downside: The most common side-effects are burning or itching of the eye, browache, headache, a slight raising of the upper lids, dry eye/mouth/nose, light sensitivity, dizziness, mild sedation, fatigue and depression.

Beta-blockers have been the mainstay of glaucoma treatment for most of the 20 years following their launching in the late 1970s. They lower eye pressure by reducing aqueous production. Despite their eroding popularity due to the arrival of the newer prostaglandin analogues (see below), these agents are still commonly prescribed for OHT and glaucoma.

Downside: Beta-blockers as eyedrops can cause the same systemic adverse effects as if taken orally. The most common side-effects involving the eye include superficial punctate keratitis (scattered pinpoints of corneal inflammation), corneal numbness and visual disturbances
(J Am Optom Assoc, 1985; 56: 108-12; Am J Ophthalmol, 1979; 88: 739-43).

Beta-blockers are either non-specific (targetting both beta-1 and -2 receptors) or specific (targetting either beta-1 or -2 receptors). Non-specific drops such as timolol (Timoptic, Betimol), levobunolol (Betagen) and carteolol (Ocupress) are generally thought to be more effective in lowering IOP than specific beta-blockers such as betaxolol (Betoptic). However, the latter cause fewer systemic side-effects.

Beta-blocker eyedrops, as with all other ophthalmic drops, enter the body via tear ducts that connect with the nasal cavity. This enables the drug to bypass the liver and directly enter the body’s circulation. Consequently, a significant amount of drug is absorbed – a typical dose (one drop of 0.5 per cent timolol solution in each eye) is as potent as a 10-mg oral dose for treating hypertension and angina (Ophthalmology, 1984; 91: 1361-3).

It’s well known that beta-blockers come with an extensive list of side-effects – some of which may be lethal. A review of nearly 550 reports of adverse reactions with timolol, sent to the National Registry for Drug-Induced Ocular Side Effects, found that half of these were linked to systemic reactions affecting the heart, lungs, central nervous system, digestion and skin (Ophthalmology, 1980; 87: 447-50).

A study of postmenopausal women with either eye hypertension or glaucoma found that those treated with timolol had significant decreases in HDL cholesterol, while total (and LDL) cholesterols were increased (J Glaucoma, 1999; 8: 388-95).

Respiratory problems are also a common complication of beta-blockers, particularly in those with a history of lung disease. One case report described a 67-year-old man with stable chronic obstructive lung disease going into respiratory arrest just 30 minutes after receiving his first dose of timolol (Chest, 1983; 84: 640-1). Another report told of a 74-year-old long-term asthmatic who developed a severe – and fatal – attack of asthma several hours after taking timolol (Nihon Kyobu Shikkan Gakkai Zasshi, 1990; 28: 156-9).

Nevertheless, drug-induced respiratory side-effects such as breathlessness and increased exercise intolerance are often overlooked or written off by doctors as simply being normal signs of ageing among the elderly (who make up the majority of glaucoma sufferers).

Prostaglandin analogues such as latanoprost (Xalatan), bimatoprost (Lumigan) and travoprost (Travatan) have toppled beta-blockers off their dominant position in the glaucoma drugs market. They lower eye pressure by increasing the size of the spaces in the drainage system, allowing more fluid to flow out of the eye. The popularity of prostaglandins for glaucoma therapy has been attributed to their superior eye-pressure-lowering effects (Br J Ophthalmol, 2004; 88: 1391-4) and their easy-to-comply-with, once-daily dosing.

Downside: All three types of prostaglandins often cause bizarre changes in eye colour and eyelashes. The eyes may darken due to an increase in melanin (the eye-colouring pigment) in the iris; there may be darkening of the skin on the eyelids and sometimes under the eyes; and the eyelashes may increase in length and thickness (often regarded as a benefit).

Uveitis (inflammation of the nourishing membrane of the eye) is a more serious side-effect commonly seen with latanoprost (Ophthalmology, 1998; 105: 263-8). Glaucoma patients with a history of uveitis were most likely to have a flareup, and a small number of patients with no previous uveitis also developed the condition after using latanoprost eyedrops (Acta Ophthalmol Scand, 1999; 77: 668-72).

Prostaglandin eyedrops can also induce macular swelling, especially in people who have undergone cataract surgery (Am J Ophthalmol, 2002; 133: 403-5), and they may also cause eye pressure to fall too low, resulting in eye damage due to choroidal detachment (Am J Ophthalmol, 2001; 132: 928-9).

Prostaglandins have been hailed by the medical profession as the best tolerated eyedrops with the fewest systemic side-effects. Nevertheless, as WDDTY has uncovered, latanoprost can cause cardiovascular effects as well as headache and facial rash (J Ocul Pharmacol Ther, 2003; 19: 405-15; BMJ, 2001; 323: 783).

A case report from Germany described a young patient using a beta-blocker–latanoprost combo to treat his aniridia and glaucoma enduring heavy sweating over his entire body for up to two hours due to using the drops (Ophthalmologe, 1998; 95: 633-4). A study comparing latanoprost with the alpha-adrenergic brimonidine found that nearly half the patients using latanoprost complained of “hands and feet that became cold easily” (Ophthalmology, 2002; 109: 307-14).

Eyedrops in your lenses:
In acknowledgement of these drug side-effects, the medical industry is now working on a new generation of treatments for glaucoma as well as for hard-to-treat retinal diseases. These novel ideas include contact lenses that incorporate nanotechnology to deliver drugs directly into the eye.

Medicine understands that 95 per cent of the medication administered via eyedrops drains into the nasal cavity and enters the bloodstream – hence, the adverse systemic effects. The assumption is that, if a drug can be directed to only go where it’s needed, then most of the unwanted effects will disappear.

While this appears to be a valid line of reasoning, there is still the issue of the delivered drugs themselves and their long-term risks. Eyedrops or high-tech contact lenses – they are both just time bombs in different gift-wrapping.

A Field Guide to Body Work