Picture being 45 years old, relatively healthy and fit. But during the last 6 months, things have become different. You are more tired, anxious and nervous. Small things which didn’t bother you before are now annoying. Foods which never troubled your stomach cause pain. Sometimes you feel overheated and cold all at once. When other people turn up the heat, you feel compelled to remove a layer of clothing. You look in the mirror and the “plumpness” from your face has disappeared. You are, in a word, “peri-menopausal”– around menopause.

While every woman is different, the beginning of menopause commonly occurs between the ages of 42 and 55. In the five to ten years prior to menopause, the ovaries become less sensitive to hormonal signals which stimulate estrogen and progesterone. And although there are still about 10,000 immature follicles left in the ovaries, they fail to mature. Because the ovaries do not produce consistent amounts of hormones, the menstrual cycle becomes irregular. Eventually, the ovaries stop producing enough of the estrogen hormone, periods cease, and menopause arrives.

The Transition of a Lifetime

For a woman, menopause is perhaps the most crucial transition she will experience in her life. Approximately 1.3 million women reach menopause each year, and that number will double by the year 2010, when 60 million women will be close to, or complete with, the transition of menopause (1).

Although most women will experience some symptoms, they may be quite varied. Between 50% and 80% of women experience hot flashes, lasting two to three minutes, during the first several years of menopause. Women may also notice increasing fatigue, nervousness, insomnia, palpitation and emotional stress. Some sources include depression, although thankfully no studies objectively support that menopausal women suffer from it any more than the rest of society. Research indicates that women (as well as men) are more likely to experience depression in their twenties and thirties than in mid-life (2).

Estrogen Therapy–Is It For You?

About 95% of women in the Western nations spend approximately one-third of their lives in a state of estrogen deficiency. It is estimated that today as many as 30% of these women seek out some kind of estrogen replacement therapy (ERT). ERT has been used to alleviate hot flashes, night sweats, depression and anxiety. It is also recommended for prevention of cardiovascular disease and osteoporosis in menopausal and post-menopausal women.

In the United States, estrogen is commonly taken in doses ranging from .3 milligrams to 1.25 milligrams for the first 25 days of the month. Oftentimes, progestin is added for days 16-25 in doses of 2.5-10 milligrams. Some women have opted for the skin patch, which is applied once each week. Many women with symptoms who are also interested in taking the least amount of estrogen possible, have opted to take their estrogen every other day.

As most women know, choosing estrogen replacement therapy is not an easy decision, even if it does alleviate some menopausal symptoms. Results from several studies indicate that ERT provides some health benefits for women who have entered menopause. It reduces risk of death from coronary disease by 40% and risk of hip fracture by as much as 60%. However, the same studies show that this therapy also increases the risk of cancer in the uterus and the breast (3).

On the bright side, natural medicine therapies have a long tradition of use in this country and abroad to support the changes during menopause. In the Orient, the hormonal decline experienced by women in their 40’s and 50’s is viewed as a “deficiency of the blood.” Therefore, menopause is a time to strengthen and build the blood with herbs such as Dong Quai (pronounced Dong Kwi). Dong Quai (Angelica sinensis root) has been used for centuries to help combat menopausal symptoms such as anxiety, depression, nervousness, insomnia, and hot flashes. It contains “phyto-estrogens,” or plant estrogens, which are easily absorbed and utilized. A Japanese study showed that Dong Quai increased both estrogen and progesterone levels in women with insufficient ovarian function (4).

Dong Quai is generally not taken by itself, but rather in combination with other nutritive and synergistic herbs. That’s because, in Chinese medicine, the herb is considered “warming”, and may therefore aggravate some of the menopausal symptoms such as hot flashes and nervousness. Typical Dong Quai-based formulas may include other female-oriented herbs that have “blood building” properties.

These herbs may be taken in the form of a liquid extract, capsule, tablet or strong tea. I usually recommend two to three doses per day, for one to two weeks out of the month.

Nutrients also support women through menopausal changes. The following are the most popular and beneficial:

Western medicine often relies on sedatives for various stress-related symptoms, and menopause is no exception. There are, however, many herbal alternatives for these synthetic relaxants. Valerian (Valeriana officinalis root), Passionflower (Passiflora incarnata blossom), and Chamomile (Matricaria recutita blossom) are botanical relaxants with centuries of clinical and traditional use. They may be taken in the form of a liquid extract, capsule, tablet or strong tea. These herbs should be taken daily, as needed, and are often effective for menopausal women who are unable to sleep due to recurring hot flashes and insomnia.

Homeopathy is a highly researched medical system, and is a useful tool for treating menopausal symptoms. Consider these remedies:

Lower potencies– 3X, 6X, or 12X– taken three to four times daily usually provide good results. Obviously, it is best to consult a homeopathic Materia Medica or your health care practitioner to find the appropriate remedy for your case or constitution.

It’s Not a Program Without Diet and Exercise!

Diet is also of the utmost importance during this transition. The excessive use of caffeine, alcohol and cigarettes are all important lifestyle choices that worsen the symptoms of menopause. And refined sugar, red meat and chocolate don’t really help either! Your foods should be prepared simply, increasing your intake of fruits and vegetables and reducing high fat foods. You should replace frying with steaming or baking.

Exercise is also essential. If you do nothing else before, during, or after menopause– EXERCISE! An increasing number of clinical studies have shown that weight-bearing exercise improves bone density and should be used as part of a program to prevent osteoporosis (8). This means running, brisk walking, or low impact aerobic workouts of at least 30 minutes, three times each week. And exercise will not only help your bone density, it will reduce your risk of cardio-vascular disease (9).

A Rotational Program for Menopause

So, you ask, what should I do today? Although all cases of menopause may need to be treated individually, the following is a simple rotational program for women who are in their menopausal years (ages 42 to 55):

Note: If menopausal symptoms are acute, use both herbal and nutritional support remedies at the same time. If you suffer from insomnia and nervousness, use the relaxing herbs Valerian, Passionflower, and Chamomile as directed above, as needed. A Vitamin B Complex may be used during week one and three for additional nutritional support.

The above is a sampling of the many options available to the menopausal woman. This era in medical care is very exciting for many women who now have the opportunity to make menopause a less harrowing experience and a more comfortable transition.

Janet Zand, OMD, L. Ac., is a respected naturopathic physician who lives and practices in the Los Angeles area. She has developed a unique and effective method of combining herbal medicine with nutrition, homeopathy and acupuncture. Her credentials include a Doctor of Naturopathy, Doctor of Oriental Medicine, and Certified Acupuncturist. Dr. Zand has over fifteen years of clinical experience treating with natural medicine, as well as having formulated her own line of herbal supplements.

Balance Your Diet, Control Your Weight 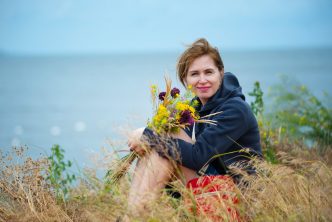 Non-Hormonal Therapies for Dealing with Peri Menopause and Menopause

Interview with Susan Winter Ward:Yoga for the Young at Heart